Native Token: How crypto exchanges use their own tokens

Crypto platforms are looking to find as many ways as possible to make a profit and have an impact on the cryptocurrency market. One of these methods is native tokens.

At the time of this blogpost, 12 out of 30 exchanges had their own native tokens. 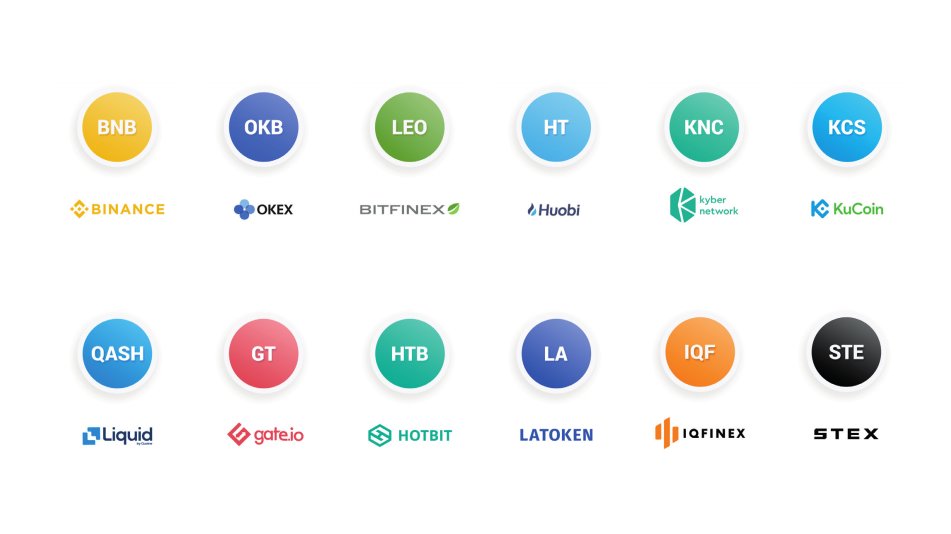 How crypto exchanges use their own tokens 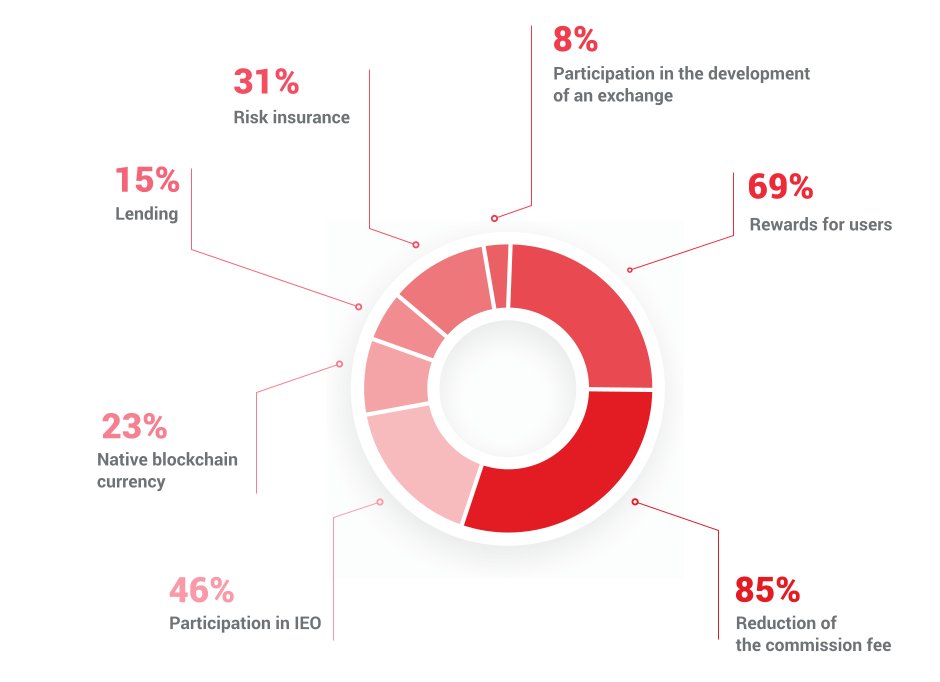 As you can see from the diagram, most often, exchanges use their tokens to:/h4>

Listing of native tokens on other exchanges:

To increase turnover and distribution of their own tokens, exchanges often allow other trading platforms to list them, while the major part of the funds is still traded on the «parent» exchange. The only exception is GT token: according to CoinGecko, most of its trading volume comes from other platforms.

The chart below shows the distribution of trading volume for tokens that are not only listed on their own exchanges.

In order to determine the dynamics of interest in native tokens, here the Google search results from January to May 2019. 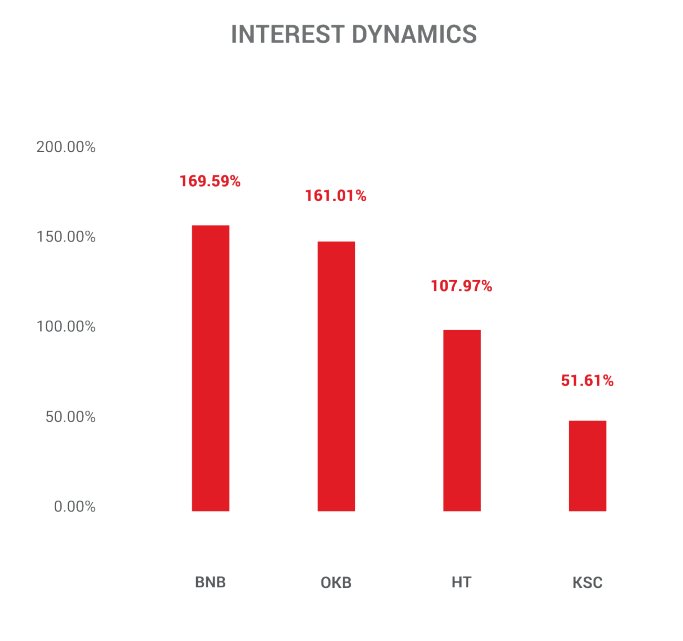 Binance and its own BNB token

Since the beginning of the year, the BNB rate has grown by over 260 per cent, while the growth of BTC, for instance, was only 40 per cent.

The rapid growth of the BNB rate has much to do with the development of the exchange itself, and Binance activities where the token is applied. For example, IEO. 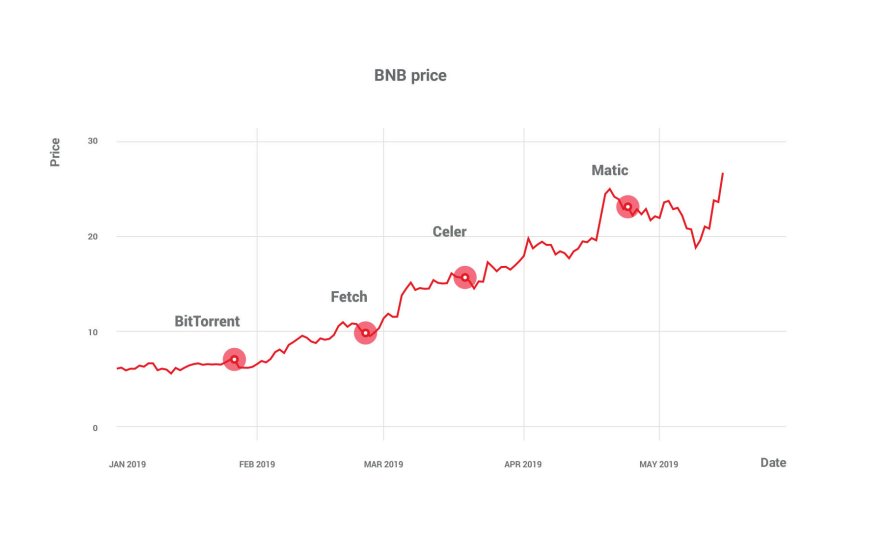 Here the key IEO points on the BNB rate chart: BitTorrent, Fetch, Celer, and Matic. The table below shows the BNB rate during each project’s IEO.

As can be seen from the table, after the first IEO, the token price increased by 16.61 per cent. The curve for this period on the chart is still quite flat, though. But it becomes steeper with every IEO, making the rate increase more than twice. Thus, Binance has obviously chosen the right development path to strengthen its native token and increase its capitalization, and the IEO they run has been actively contributing to this.

OKEx and its own OKB token

You can see the Blockcloud IEO conducted on April 10 is mapped on the chart. The event was announced in early April, and before that, in March, the exchange unveiled preparations for the launch of the IEO platform. After the announcement and the first fundraiser, the growth of OKB rate has reached a peak of 219 per cent. In other words, OKEx, just like Binance, is strengthening its own token in the market.

Huobi and its own НТ token

Notice the IEO of the TOP Network project mapped on the chart. In March 2019, Huobi announced its asset listing platform based on its own HT token, and they ran their first IEO at the end of March.

KuCoin and its own KSC token

Since the beginning of the year, the growth of the KSC rate has reached 84 per cent. They announced the launching of the IEO platform on March 20 and ran their first IEO on April 10. The chart below demonstrates the announcement affecting the growth of the token rate, and the IEO stabilizing it afterward. 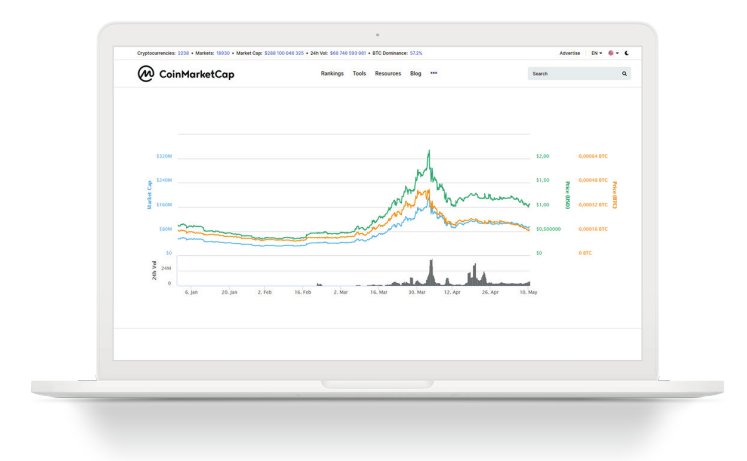 On the chart below, you can see the dynamics of native tokens’ rates from January to May 2019 in comparison with BTC and ETH prices. 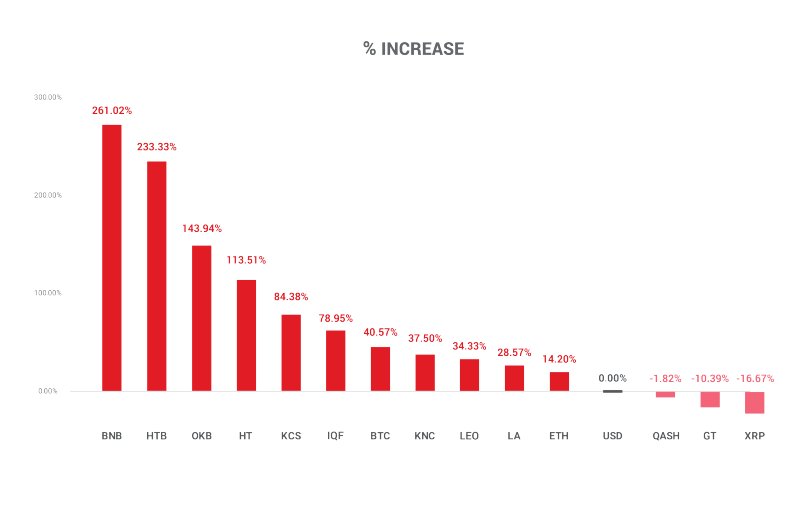 We can see that 9 out of 12 exchanges shown on the chart have their own IEO platforms and use their own tokens in this process. Thus, the exchanges have obviously found a real use for these.

Native tokens are still actively used by market leaders as an effective promotion tool. But as compared to 2018, the ways these tokens are being used have changed. Back then, in most cases, they were very similar to stocks: the holders had their preferences, but there was no particular sense in buying and selling coins. When the IEO became popular at the beginning of 2019, it provided an effective model for native tokens to be applied, and thereby justified their purchase.
The growing interest in crypto exchange coins has resulted in them being placed not only on «native» platforms. For comparison, 8 out of 12 native tokens are now traded on other exchanges, while last year, only Biance’s token was. Crypto exchanges are still the market leaders and drivers of the industry, and the growth of prices for their tokens depends directly on how exactly these tokens are being used.