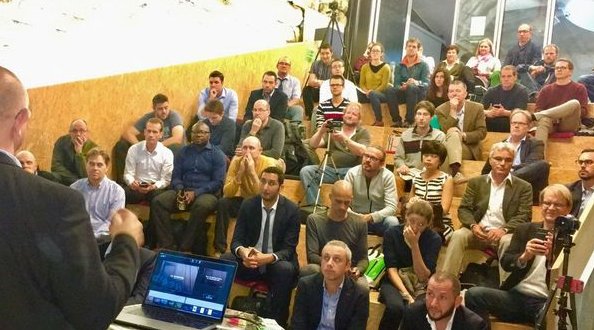 Who should attend?
All people interested in blockchain applications in science and knowledge creation.

This Meetup is organised as a satellite event of a 4 day Twin-unconference happening in 2 cities:

About the event:
The potential for blockchain technology in science and research is growing in appreciation amongst scientists.

In the future, blockchain will make it possible to open up current silos, fix media breaches and enable new ways of knowledge creation. Ideally the research process, scientific communication and financing of research will become a continuous and an open process.

This is not about short term gains or the current ICO hype, but about the long-term development of more sustainable and resilient societies that decentralised technologies offer. The aim of these unconferences is to bring current players to the table and sondize cooperation potentials.

Sönke Bartling is an associated researcher at The Alexander von Humboldt Institute for Internet and Society (HIIG) and the founder of Blockchain for Science. Bartling’s focus is on the blockchain revolution and what it could mean for science and knowledge creation. An advocate of open science and good science practices, Bartling is interested in developing online tools for knowledge creation. Bartling is a board certified radiologist with broad clinical experience and a researcher in basic medical imaging sciences.

Lawrence Rajendran is a professor of Systems and Cell biology of Neurodegeneration at the University of Zurich. His lab focuses on understanding the cellular complexity underlying Alzheimer’s disease. He is one of the founding members of the International Society for Extracellular Vesicles (ISEV) and served on the board as the Steering committee member. On the social side, he is also the founder of Raise.Rural, a non-profit organization dedicated to support rural students in India to pursue research. He has won many awards and honors including the European Young Scientist Grand Prize, German Neuroscience Society’s Schilling’s prize, the Breuer Award, the National Medal of Honor and the President’s Prize by the Govt. of Panama, German Alzheimer’s Hirnliga’s Steinberg-Krupp Prize, Boehringer Ingelheim Apopis Prize, European Neuroscience Society Award and a University gold medalist in both Bachelors and Masters. Rajendran featured in the 2009 World’s top 100 Scientists.

Martin Etzrodt is Head of Research at Validity Labs AG, Zug & Visiting Postdoctoral Scientist at ETH Zurich. He is focused on education and building a research branch within Validity Labs with the goal to establish decentralized blockchain solutions as a new paradigm for collaborative research platforms that can be developed on the basis of trustless, third party independent technologies. Dr. Etzrodt has been involved early on in think tanks that push toward the implementation of blockchain tools in science to improve the communication and collaboration among scientist as well as preserving and enabling open access to research data through these new technologies. As a chemist and molecular biologist by training he holds a PhD in Immunology from the University of Lausanne.