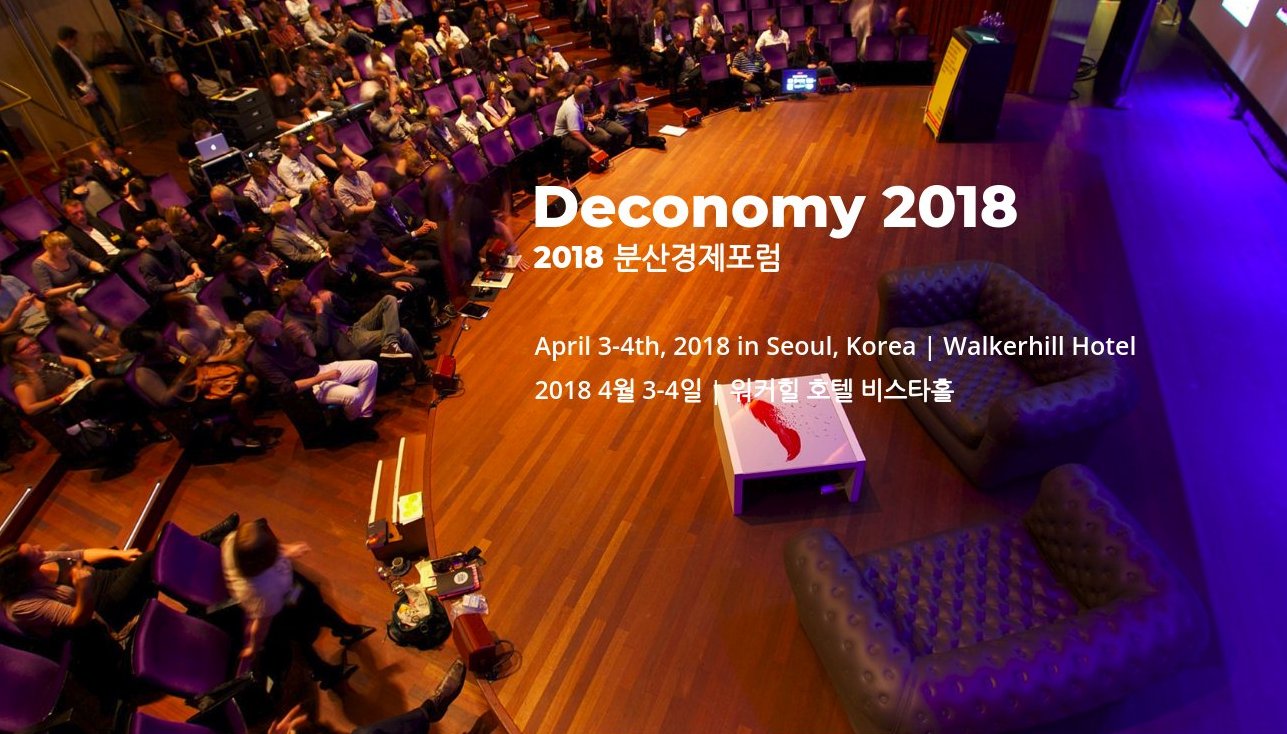 During April 3rd and 4th, Deconomy will hold its first annual blockchain forum in Seoul, South Korea, the critical hub of blockchain and cryptocurrency. Amidst high interest in the field,

During April 3rd and 4th, Deconomy will hold its first annual blockchain forum in Seoul, South Korea, the critical hub of blockchain and cryptocurrency. Amidst high interest in the field, Deconomy 2018 will gather the brightest entrepreneurs, thought leaders, investors, developers, academic and policy groups, and blockchain enthusiasts. The forum consists of a two-day program, with keynote presentations and panel discussions about major topics surrounding the industry.

Since the introduction of Bitcoin in 2009, endless possibilities of censorship-resistant cryptocurrencies and decentralized applications have flourished. The world is now witnessing a paradigm shift, from a single authoritative system which depends on trusted entities to a consensus-based system with no single point of failure. One of the many promises that blockchain technology provides is to give financial access to all people through open, public protocols. The theme ‘Paradigm Shift to Open Protocols’ will focus on public or permissionless blockchain projects that enable anyone from anywhere at any time to freely transact any data without permission.

Soon after Satoshi Nakamoto’s white paper on Bitcoin was published, Bitcoin has recorded tremendous growth with an equal amount of global interest. The Bitcoin market expanded further as major financial institutions started entering and investing in Bitcoin, leading to the creation of a futures market for Bitcoin, which implies the official integration of Bitcoin into the traditional financial system. However, the issue on scalability has been consistently controversial and eventually led to a diverge of the Bitcoin community and discrepancy in defining Bitcoin. On the one hand, Bitcoin is viewed as digital gold by emphasizing its role as store of value. Conversely, the other party believes Bitcoin is a digital currency and should be valued upon its actual usage. Deconomy will elaborate on this issue and will open the floor for intense discussion.

Ethereum, The Future of World Computer

As part of Blockchain 2.0, Ethereum appeared in August 2014 with its grand mission to be a world computer, enabling developers to build cryptographically secure and decentralized softwares. Since its inception, Ethereum quickly positioned itself as one of the most popular platforms for running over 750 decentralized applications. As a decentralized platform that runs Smart Contracts, Ethereum has become a significantly powerful shared global infrastructure that can freely transfer value and represent the ownership of property. Development of innovative technologies such as sharding technique, Casper, Raiden Network, and Plasma is actively underway. Deconomy will focus on Ethereum’s potential and possibilities, its recent technical developments, and future challenges ahead.

State of Blockchain and Market Trends

Undoubtedly blockchain is rapidly becoming the hot topic worldwide with the expectation to change the current dynamics. However, in stark contrast to the high interest in the topic, knowledge of the underlying blockchain technology is still at a nascent stage. In other words, everyone has heard of bitcoin but there are few who truly understand the disruptive power this technology enables. All industries are trying to incorporate blockchain into their existing business, with high hopes to be a forerunner of this innovative trend. Deconomy will elaborate on the current status of the blockchain industry and analyze what is necessary for further development.

Regulation has recently become an inevitably crucial topic in the blockchain industry, as cryptocurrency goes viral in countries worldwide. Explosive public interest in cryptocurrency and initial coin offerings (ICO) has naturally spurred governments to take regulatory action, especially since mining and ICO scams and suspicion of insider trading by exchanges increase. The main question is whether governments should intervene or not, and if so, to what degree should governments intervene. Furthermore, mainstream adoption of blockchain technology seems promising in that main conglomerates are increasingly adopting and implementing the new technology in their existing line of business. In this session, Deconomy plans to discuss in depth about the current regulatory measures and their feasibility.

Since the advent of blockchain technology, many corporations and institutions have realized the potential of distributed ledger system, in transforming an isolated system to an interoperable infrastructure. Also, well known as ‘permissioned’ or ‘private’ blockchain, distributed ledger technologies are promising in the sense that they eliminate the need for data replication and reconciliation, and possibly entirely remove a third party or intermediary in transactions to achieve high efficiency and cost reduction. While maintaining the status quo of transitional industry as a closed network, unlike public blockchains, DLT explores the possibilities of many financial use cases in payment systems, trade finance, wholesale banking, remittance, and identity management. Concerning this topic, Deconomy welcomes top players in the field to discuss the potential of distributed ledger system in a regulated industry.