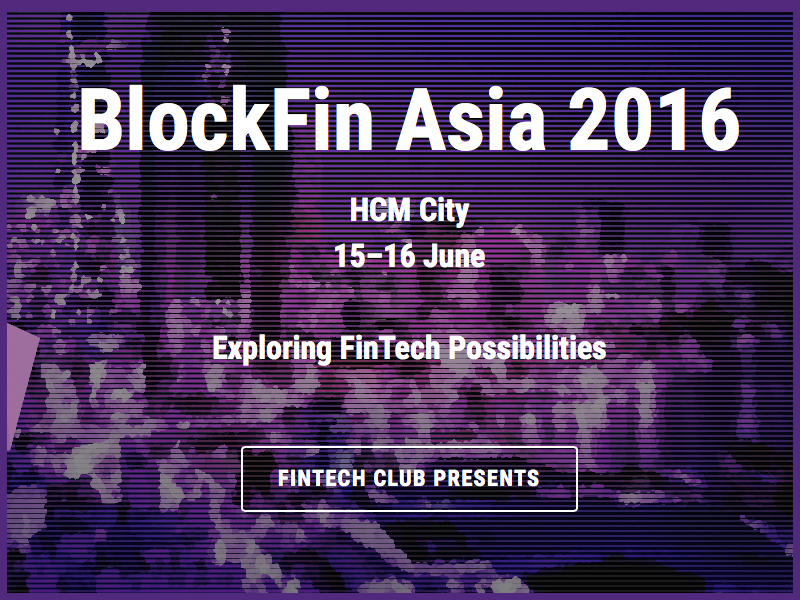 On June 15-16 a new conference called BlockFin Asia 2016 will held in the beautiful city of Ho Chi Minh, Vietnam that will showcase both Fintech and blockchain

On June 15-16 a new conference called BlockFin Asia 2016 will held in the beautiful city of Ho Chi Minh, Vietnam that will showcase both Fintech and blockchain innovations. Day one will concentrate on blockchain technology discussions with innovators from the industry such as Bitcoin.com CEO Roger Ver, Brave New Coin’s Tone Vays, The Blockchain Heist Film Director Ham Tran, and additional guests speaking on the disruptive power of distributed ledgers.

Prior to Vietnamese training, he served as Special Assistant to Under Secretary Robert Hormats.

Tom Moyes is Project Director of the Mekong Business Initiative—MBI—a project of the Asian Development Bank supported by Australia’s Department of Foreign Affairs and Trade.

Prior to joining MBI, Tom spent seven years with the World Bank Group, serving as Senior Technical Advisor to the AgriFin Program, and before that as IFC’s Access to Finance Program Manager in Indonesia.

Tom started his career as a commercial bank loan officer for Swiss Bank Corporation in New York City. He has a BA degree from the University of California at Berkeley and an MA from the Fletcher School of Law and Diplomacy.

Sean Preston is Visa’s Country Manager for Vietnam, Cambodia, and Laos, responsible for all aspects of Visa’s business in these fast-growing emerging economies.

A New Zealander, Sean holds a Bachelor of Commerce from Auckland University, a postgraduate Diploma in Banking from Massey University, and is a Fellow of the Financial
Services Institute of Australasia (FINSIA).

Warren is responsible for designing and executing the roadmap that will lead to VIB becoming Viet Nam’s most innovative and customer-centric bank. In the last 12 months, VIB released the country’s finest native mobile app, the first Apple Watch app in Vietnam, social media recruitment programs, instant account opening and a richer customer experience website. All designed from the ground up using customer-centric design methods.

Warren has more than 15 years experience working in digital roles, 11 of which were in financial services. His career combines positions in large corporations and responsibilities in public sector, SME and start-up organisations.

Sandeep is Head of Retail Banking at VP Bank. He has been in this position since May 2015. Previously, Sandeep lived and worked in numerous countries in Asia, the Middle East, Africa and the US.

His prior roles include consumer banking, wealth management and transformation roles at various international financial institutions starting with Citibank, Standard Bank, Barclays and AIA Group. He also served as Head of Retail at Shinsei Bank in Japan, one of the earliest, digitally-enabled banks in Japan, which was launched in 2001.

Sandeep is a Sloan Fellow and has an MBA from MIT, Sloan School of Management.

Maxime has worked in the payment and cash management space for 12 years across Europe, the Middle East and Asia. Since coming to Vietnam in 2012, his focus has been applying the latest trends in digital payments and collection to the local market. Maxime led Standard Chartered initiatives in Vietnam that cover mobile money for corporate, MPOS, online gateway, mobile e-commerce and digital supply chains.

Anson is CEO and co-founder of CoinPip, a Blockchain-based fund transfer service headquartered in Singapore. He is also Chairman of ACCESS, an industry advocacy group.

As an early Blockchain adopter, Roger has provided seed capital to numerous FinTech startups including Blockchain.info, Ripple and BitPay. Roger travels the world as an advocate of distributed ledger technologies.

DistributedLab is a research lab involved in the development of cutting-egde blockchain projects.

Pavel is a decentralized systems expert, university lecturer and public speaker. He serves as Vice Chancellor for Kharkiv National University of Radioelectronics.

Luis started working in the Blockchain remittance space in early 2014 and built one of the most recognizable brands. He popularized the term ‚rebittance’​ to describe the token-to-cash solution that many similar young businesses around the world are currently offering.

His writing on the Blockchain and its impact on remittances and mobile money has been featured on Techcrunch, The Next Web, Tech in Asia and Rappler.

In 2015, Luis presented on these topics at the International Money Transfer Conference (IMTC) in Las Vegas and Miami, at the Brookings Blum Roundtable in Aspen, and at an industry conference in SIngapore.

Luis has been building tech startups in the Philippines for nearly a decade. He blogs at medium.com/@cryptonight

Simon is also a fund manager and author of the book, ‘Bank to the Future.’

BankToTheFuture.com is an investment platform that accepts Blockchain-based payments. It opens the market for investing in private businesses including FinTech and Blockchain companies as well as other alternative financial products.

The service offers a new method to raise capital that no longer excludes small businesses that can not afford the costs and upfront fees.

Ken stands at the forefront of Blockchain technologies in Hong Kong. Having spent the past three years evangelizing the industry, Ken has helped many organizations adopt Blockchain-based market solutions.

Ken has successfully positioned ANX International to be a one-stop shop for Blockchain technologies, leading the next wave of companies going live with commercial implementations.

Evelyn is developing the Blockchain technology ecosystem in Korea through marketing and by building partnerships with existing finance/IT/FinTech industry stakeholders.

She previously worked in online marketing where Evelyn managed the licensing of games to local partners and marketing agencies.

Jerry is a financial technologist who has worked on Wall Street trading desks at Goldman Sachs and J. P. Morgan for a total of 14 years.

Experienced in derivative risk pricing systems and big bank politics, Jerry has turned to the field of financial monetary reform. He sees technology as a way to evolve the current monetary systems to one that is more fair and sustainable for the betterment of the under-served and the global economy.

Jerry is author of the monetary reformist blog WallStreetTechnologist.com and works on various blockchain-related projects in Asia. The most recent venture, Satoricoin.jp, is the first customizable physical Blockchain token aimed at the mass market.

Korbit is a leading Korean provider of blockchain-related services. The company recently launched Hyphen, an aggregator for cross-border payouts with distributed ledger settlement.

Prior to joining Korbit, Jason co-founded two mobile-based startups in South Korea. He also worked at Accenture as a consultant for several years in the U.S, specializing in delivering custom IT solutions for Fortune 500 companies.

Remitsy is building a next-generation payments platform for international trade. It offers a solution for lower-cost cross-border payments to China.

Prior to starting Remitsy, Neil managed business development at the largest Blockchain exchange operator in China. He has a diverse background in manufacturing, logistics, and international trade.

Neil is a prominent member of China’s FinTech community. He is fluent in Mandarin, having lived and worked in China since 2004.

500 Startups is an early-stage venture capital firm and accelerator.

He previously served as Director of Strategy and Corporate Development for CJ CGV Vietnam, and as Senior Analyst at Dean & Company Strategy Consultants.

Hieu is an Associate Director of Private Capital at Dragon Capital Group Ltd. He a supervisory board member for VietFund Management and curates the Fintech Club Vietnam forum.

Tone, a 10-year Wall Street veteran, started as a risk analyst at Bear Stearns. Later moving to JPMorgan Chase as Vice President, in the aftermath of the financial crisis, his expertise is in Economic Trends, Trading and Risk Analysis.

He is the Head of Research at BraveNewCoin where you can find his latest work.

Tone holds a Masters Degree in Financial Engineering from Florida State University and Bachelor’s degrees in mathematics and geology.

Mona is an accomplished AML/KYC subject matter expert. She is the Director of Risk Management and Special Projects for ACCESS. Her work includes working with the Global Blockchain Forum to establish best practices and practical guidelines for consumers and businesses in this domain.

Rick has worked for 30 years across broad industries in the UK, China, Singapore, Switzerland and Vietnam.

Posted to China as Finance Manager with BP in 1990, he soon transferred to Vietnam where he has been based since. This makes Rick probably the longest Vietnam-domiciled Brit in the country.

In 1994, he founded TRG, a technology company with a vision of making businesses shine by providing IT equipment that outperforms. This adventure has taken Rick on a journey traversing 39 of the 80 countries that TRG customers come from, with the promise of more to come.

David founded his first company while teaching marketing and management at a university in Australia. The company went on to be listed as one of Australia’s top 10 fastest growing companies by BRW for several years. After selling that enterprise, his focus shifted to Asia and Vietnam markets.

With a history of building successful businesses, David is now working on a global scale with Future.Travel being directly marketed in 14 countries worldwide.

As director, Ham’s credits include ‚The Anniversary,‘ ‚Journey From the Fall,‘ ‚How to Fight in Six Inch Heels‘ and ‚Hollow.‘

Ham has produced and worked on numerous films, most notably: ‚Owl and the Sparrow,‘ ‚Oh, Saigon‘ and ‚The Rebel.