Tech Bureau Corporation an Osaka-based company and Infoteria Corporation, the Tokyo-based firm has announced the good news that the first block chain microfinance service was being successfully demonstrated by the two businesses. The verification of the operation of the block chain Mijin was made to apply on Microsoft Azure using ASTERIA WARP.

Microfinance is a boon to the poor and low-income clients and is often defined as financial services offered by different types of the service providers. This term is also used to refer to the loans and other services from the providers and gave rise to the first Blockchain Microfinance services implementation.

The application of distributed ledger technology for the recording of microfinance data by using the Mijin platform have been applied by the two Japanese companies. Yoichiro Hirano, the Founder and CEO of Infoteria and Takao Asayama, the President of Tech Bureau were pleased enough to share the news to the world that the two groups of companies made an achievement of the accomplishment of the Blockchain in the world of microfinance. The two teams made a successful transaction of transferring the loans and the account data deposit that was located on the BC Finance main system which is the largest microfinance institution in Myanmar. The Chief Officer of Microsoft Japan, Mr. Akira Sakakibara commented that the successful demonstration of using Microsoft Azure, ASTERIA WARP and Mijin is being welcomed by him. 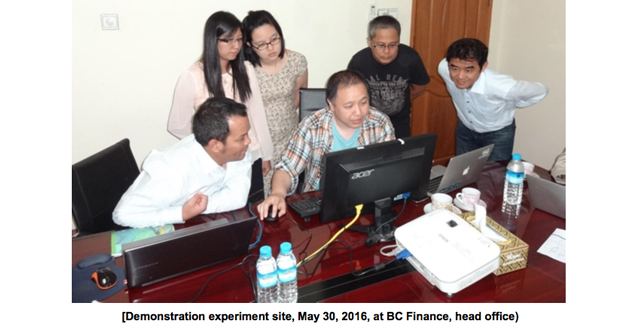 Mr. Sakakibara also announced: – that Microsoft Japan gave a warm welcome to the private Blockchain’s successful experiment that was demonstrated in microfinance. A high level of security with high performance of reliable computing environment is being provided by Microsoft Azure –a Cloud computing Platform / services and one of the world’s largest data centre of networks. In this experiment, both the companies Tech Bureau and Infoteria made a great success in recording the account data of the transactions of microfinance that was carried out by BC Finance in Mijin and started running in Microsoft Azure through the ASTERIA WARP –Infoteria. This means that the further delivery of Microsoft Azure as a platform and services for Blockchain operation, as well as the expansion of the scope of the Blockchain technology applications that values to a large number of the customers in the market. He also added that by promoting the Blockchain technology may lead the customers’ business in a better way and the products and services being provided by Microsoft that’s contributed would be continued and play an important role in increasing the value of the Client’s business.

All the transaction histories of the active holding were recorded by the group at a branch of BC Finance where 19 total branches were operated. Total three accounts were assigned by BC Finance that includes two saving accounts and a loan. The teams finally decided to continue with the research and the development work on the project for the next six more weeks in July. The firm said that the development of an application enabling data writing and clients (terminal at each branch) view to Mijin.

The technology will be a great help and a hope to the Myanmar population to get the resources it needs to help the under banked people. This would be beneficial and a supporting role in the economic growth of Myanmar as Microfinance provides loans and deposits to the broader population as well as other financial services. There was an achievement of 7 to 8 % of economic growth in Myanmar since its democratization in the season of spring of 2011 and 2016. There was an end of the military government that encouraged the lifting of economic sanctions imposed by the United States. The companies hope the cost-effective data management of Blockchain technology by a thousand fold and provide the security and immutable record atmosphere.

President of Tech Bureau, Takao Asayama explained in his words: – that Compilation as a database and a correction of direct entry errors in the data could be experienced if there is a use of Excel for any manual transaction management. These operations are performed as an ordinary task on a daily basis in financial service in any business around the world. This transfer process from one stage to another main system was quite costly, however, using the basic functions of Mijin shows stable and low-cost financial system with a focused responsibility that could be a good base built up on a Blockchain. He also said that it’s a new and forwarded step in Blockchain technology by having a complete and a difficult free mission of managing an ample number of accounts per user without any more compromise to the user experience. 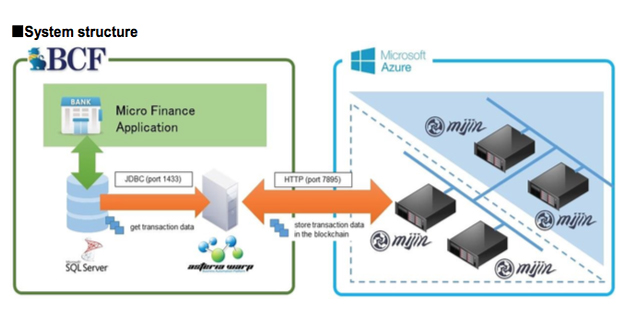 The belief of Infoteria and Tech Bureau that this successful work would broaden the reach of the Microsoft business globally. The two company’s alliances accompanied by saying that they will not only penetrate in Japan but explore themselves throughout the world globally. The Japanese based tech firm planned out to develop the alliance on a global scale by applying the feedbacks and the results of the experiments to other countries.